In my quest to visit all of the towns along the Cilento Coast, on this particular day I chose Pisciotta, a hill town a bit south of me. By the map, Pisciotta appears to be just down the coast from Ascea, a beach town near us. Conveniently, I identified a fairly direct route, which is rare considering all of the mountains. I had discussed the possibility of driving to Pisciotta via this route with my Italian friends, and a concerned look crossed their faces as they cautioned me that “la strada è pauroso” (the road is scary).

As I sat at Isola Verde having breakfast, I pondered my options. Shall I take a chance on the more direct, but scary route, or drive inland and pick up the SP 430 to drive way out of my way around huge mountains and then out to the coast south of my destination, only to drive north quite a distance. I bravely opted for the “scary route” because it would take me on “new turf” which I always prefer.

The beginning of my route was familiar as I drove to Ascea, but as I got to the edge of town, I took a turn away from the sea. In Ascea, the road directly along the sea, ends at Baia Tirrena, a cliff that juts out to the edge of water. The road was small (narrow) as I climbed up above the town, but it remained on a relatively straight path with some wiggles along the coast.

Suddenly, the road took a sharp turn to the left as I headed away from the coast to follow the side of a hill inward as a valley jutted in from the sea. As I turned, I first looked across to the other side and instantly decided not to believe what I thought I saw, because as I quickly glanced into the upcoming hairpin curve, I could see this already “small” road narrowed significantly AND a couple of vehicles were on their way toward me from the other side. Based on the size of one vehicle and the road below, I was not sure we could safely pass each other. With a steep hill on the left and an equally steep drop-off on my right, there was nowhere to go. This could involve backing up for quite a distance until a place in the road is reached that is passable. And I am basically NO GOOD backing up hills with a stick shift. So, this is what our friends meant . . .

I allowed myself to absorb what I saw for a split second. There was a visible gash in the road for quite a distance. It appeared that half the road was gone! Most likely, some of this already extremely narrow roadway had fallen down into the valley below and the road was in the process of being repaired. All of this right before the point where the large hairpin jut into the valley is over and we would be back out to the edge of the cliff approaching the sea again. I just couldn’t even begin to imagine how two vehicles would pass . . .

My mind came back to the present as I was bottoming out in the inside of the valley in the middle of the hairpin curve and I could now see the rather large (by Italian standards) black SUV barreling towards me towing a small boat!! We each slowed down and pulled to our respective edges of the road a bit. By this time, I was on a straight section of the road and we both made it without further maneuvering. I breathed a sigh of relief. Now, all I had to worry about was “la strada rotto” (the broken road). A good Italian driver does not allow his or her mind to be bombarded with multiple stresses at once.

Immediately, I find myself facing two cement pillars in the center of the road. Now, had I a moment to think logically, I would have realized that the black SUV that just passed by me fit through this, but the pillars were just close enough together to cause concern and bring me to a near-halt. Slowly, I entered the construction zone, without a clue about what I was about to encounter. This mini-adventure lasted about one kilometer, although it felt much longer at the time as I was well aware how much more “interesting” it would become should another vehicle come along while I was in the zone. Also, it’s important to note that as I entered this area, I had no idea how long this would continue, which just added to the “excitement”.

Along my construction adventure, I encountered a few workers who had to move some equipment so I could continue, and a long area of the road that was passable by only one car as they worked to carve the road further into the hillside to compensate for the no longer existent original right lane that had fallen down the mountain. I, fortunately did not encounter another car. I was quite relieved to make it out of “the zona” and by the time I arrived at Pisciotta, I had already decided to return home the same way! 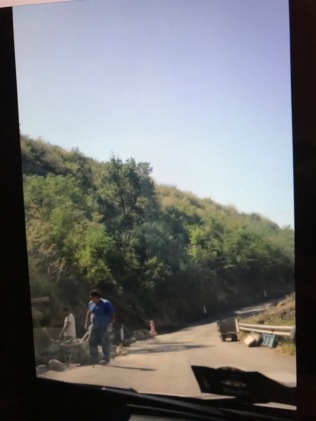 Stay tuned for my beautiful day in Pisciotta!

5 thoughts on “La Strada per Pisciotta (The Road to Pisciotta)”