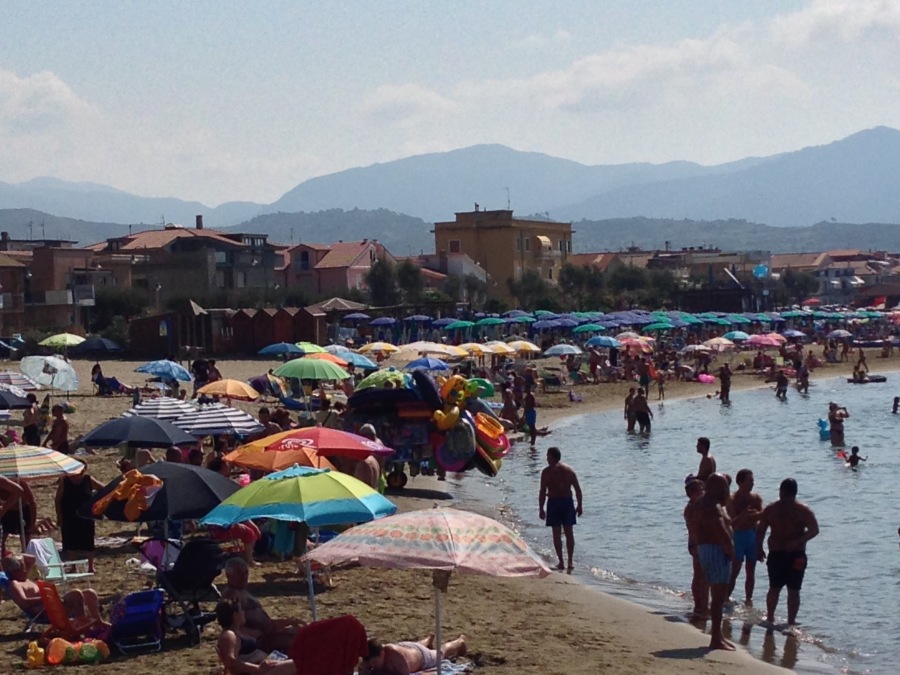 As I awoke on this first morning in Villa Velina this trip, I did what I do every morning – open all the shutters and take in the view of Monte Stella and the sea. There, below us was the magnificent scenery I would soon be part of as I experienced my very first beach day at Marina di Casalvelino! 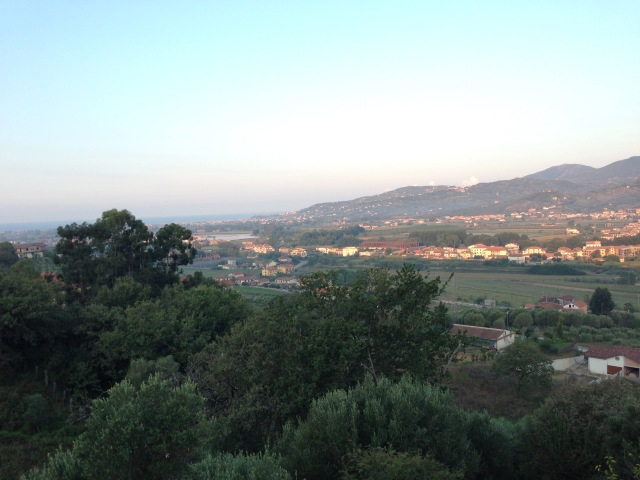 But, it was still to early to park myself on the beach – so, first things first. Down to the Marina I went for some breakfast (colazione) and my Wifi fix for the day. As I approached my favorite beachfront bar, Isola Verde, I could tell instantly that it was a whole different experience in August, abuzz with the increased influx of vacationers. 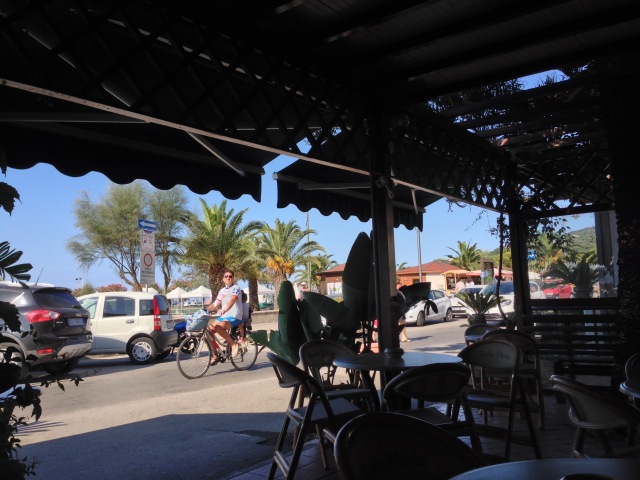 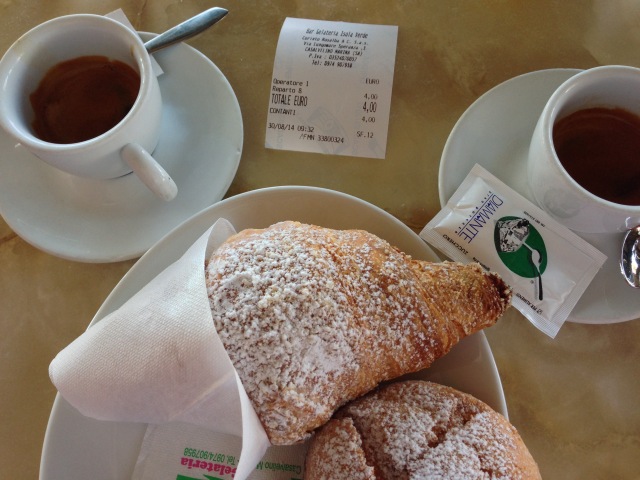 People were everywhere and finding a place to park was certainly not the easy task it was off-season. But I loved seeing the activity and people. I managed to get the last open table outside and ordered breakfast.  I relaxed and made plans for the day and then took a stroll down the street along the beach. The private beach clubs were all getting set up for the day. I choose one that looked fun, called Lido Azurro, and made a reservation for the afternoon.  This may only be rural southern Campania, but the Italians here know how to live. Not only would my reservation come with a beach chair, an umbrella and music, but also with wifi and the ability to enjoy a glass of prosecco, wine, beer . . . basically your beverage of choice. No silly rules like no alcohol on the beach like in the U.S. – after all we’re all adults!

I returned to Villa Velina to get ready for my afternoon at the beach. I packed extra beach towels from home, but I didn’t have a beach tote, no problem, I would pick one up on the way into town. As I arrived at the packed beach club, I was so happy I had made a reservation. 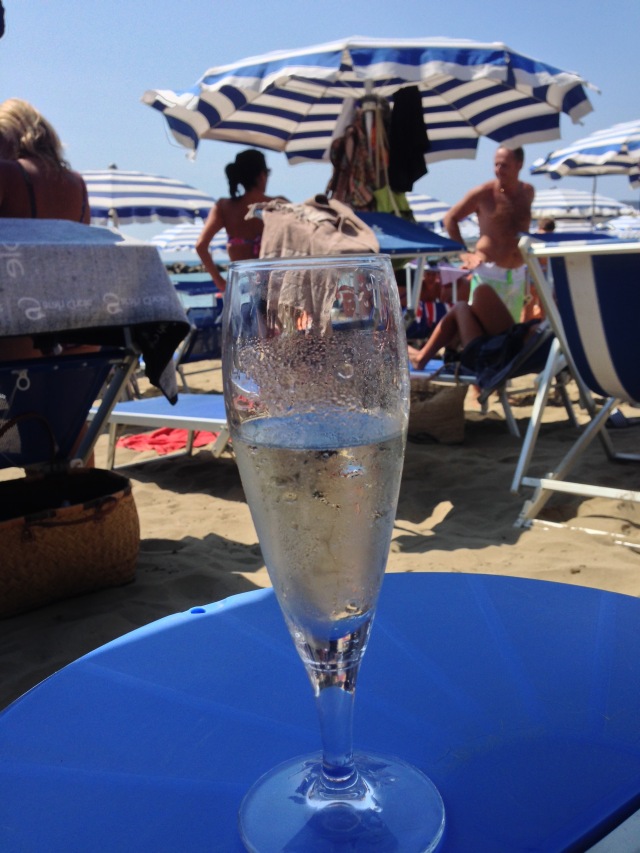 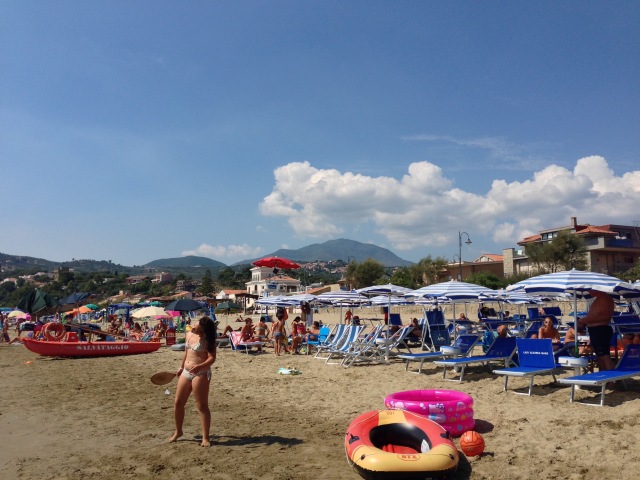 The chairs and umbrellas were lined up neatly in rows with just enough space for a lounge chair with umbrella (for the prosecco) and a small aisle for walking around their chairs. Everyone was so friendly. The couple immediately in front of me heard me speaking in English on my cell phone and began speaking to me. I did my best to communicate in very broken Italian and some charades. In less than a minute, I heard a voice from a few chairs over “perhaps I can be of assistance”.  As I looked up, I saw a beautiful woman on her way over. This is how I met my friend, Sandra. Before I knew it, Sandra came to my rescue and became my personal translator. I learned the couple lived in Naples and their niece, who also spoke very good English was at the beach with them along with her friend, also a great English-speaker.  I met them both later.  Sandra speaks an amazing number of languages in multiple dialects – at least English, German and Italian as far as I know. I was absolutely amazed to learn that Sandra lived in the states (so far she is the only one I have met there who does) and visits a friend in Casalvelino a few times a year. In fact, she told me about her friend’s pasticceria and invited me to stop by one day. She was truly an angel sent to help me that day.

I totally enjoyed my day at the beach in the thick of the native Italian vacation season and the vistas I had in all directions. Looking southwest, I could see all the way to Capo Palinuro. 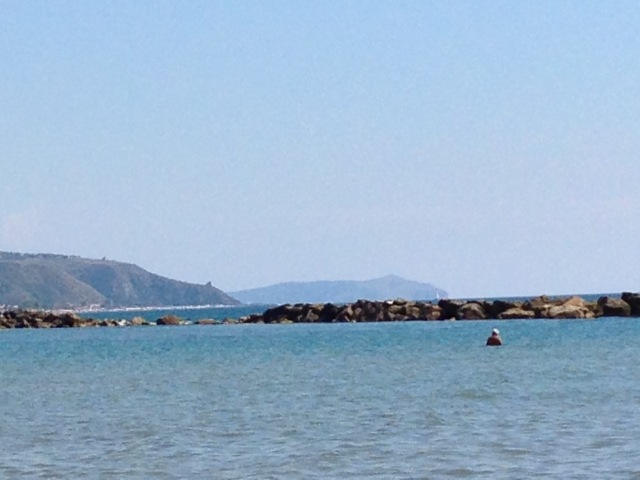 Looking to the north, I could see the boat marina and tower of Marina di Casalvelino. 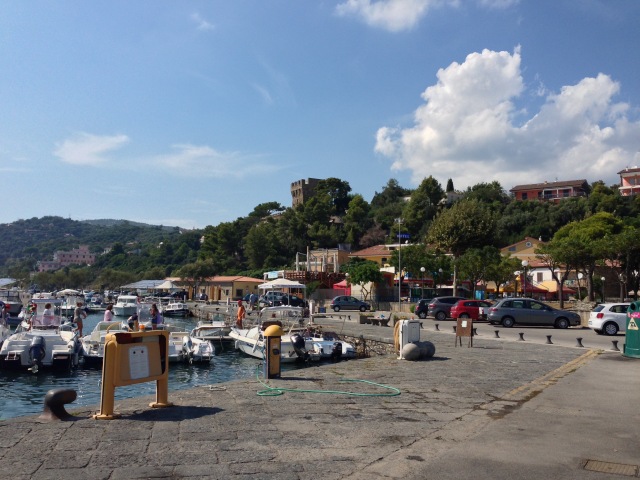 As beach day came to  an end, I reluctantly gathered my belongings and headed home. I took one last look back at the beach from the sidewalk, thinking it may be a while before I am back during the busy beach season and saved this snapshot in my memory. 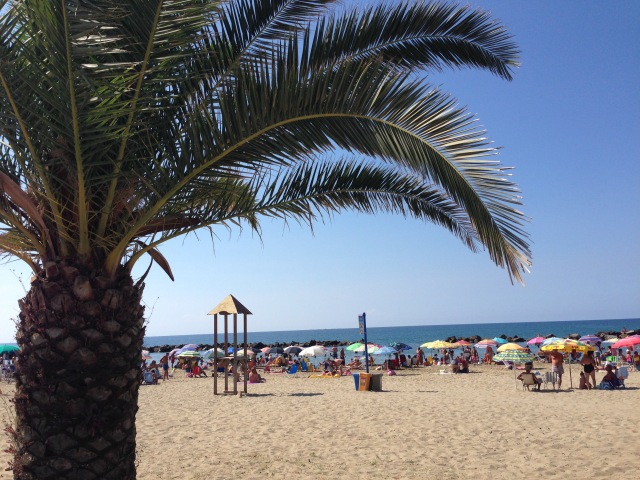